Would you support the introduction of a fresh compulsory purchase order over the land (‘the Millwall land’) currently owned by the Lewisham Council and leased to MFC and MCT?

Do you support the sale of the freeholds of the Millwall land.

Would you support Millwall Football Club’s ambition to participate in the regeneration of the land around our stadium, provided such participation was in accordance with the Core Strategy?

The Council’s position has always been that its preferred option was for Renewal and the Club to come to an agreement about the comprehensive redevelopment of the whole site in accordance with its Core Strategy. In response to the failure of the parties to reach such an agreement, the Mayor & Cabinet even agreed a pause in the CPO process last year to allow one last effort to be made for Renewal and the Club to come to terms. The Club’s response to this opportunity was to repeatedly delay agreeing to set a date for the meeting. Then, when they did finally agree to meet, no one from the Club attended. Instead, they sent external representatives who were not empowered to negotiate or authorised to make agreements.

I am taking this opportunity to formally request that the Club publish its plans and intentions, so that they can be subject to public and professional scrutiny. Enough of this war of words, of claim and counter claim. Publish the details of this scheme that you are being prevented from developing. Let’s have a proper debate about its pros and cons.

Do you understand that there is a serious possibility that MFC and MCT will not remain at their current locations in the event the land around them is sold?

I understand that this is being alleged without the release of evidence to support this claim. Similarly, I understand that the Club’s owner, John Berylson, is alleging that the Council (as the Club’s landlord) want them 'gone', without offering any evidence to support this assertion. The Council and Renewal have consistently stated that they want the Club to be part of the New Bermondsey scheme. The Den is protected through the lease granted to the Club, by the Council and in the New Bermondsey planning consent. The Club are set to benefit hugely from the proposed New Bermondsey scheme.

The claim that the New Bermondsey scheme is so injurious to the Club’s interest that its delivery would necessitate its departure from Lewisham, seems implausible to me once subjected to the most cursory examination. I am not an expert in football finance, but I understand that the new Wembley Stadium cost £1 billion. Meanwhile, the new Chelsea ground cost £500 million. I think it’s reasonable to assume that the cost of a new build stadium for Millwall would run into the 100s of millions of pounds. When I last checked at Companies House, Millwall’s last filed accounts recorded a loss of around £7 million. This was an improvement on the previous year when it posted a loss of around £11 million. I don’t think anyone is suggesting that Millwall’s recent promotion will ensure that it becomes a profitable operation. It’s consequently hard to swallow the claim that someone is willing to spend possibly more than £200 million so that an organisation can lose millions of pounds every year in a different geographical location.

Even if someone would be prepared to fund a move, there is the matter of getting a planning consent. The notion that the prospect of the arrival of an organisation that revels in its motto, ‘No one likes us and we don’t care’, would be greeted with enthusiasm by its prospective new neighbours, is probably excessively optimistic. The Club could well find itself the focus of a rigorous grassroots campaign to keep it out, which would, of course, be rather ironic.

At last year’s Labour Conference John McDonnell announced that a Labour government would ban publicly funded bodies from awarding contracts to companies registered in offshore tax havens. Do you support that policy?

I would need to be clearer on the detail of what was being proposed. I am very much alive to the reality of unintended consequences. I certainly believe that we need to try to act to limit the amount of income that is escaping taxation. Moving against tax havens would be part of that.

Whatever the aspirations of the leadership of the Labour Party, politicians who are actually decision makers in government have to operate within the law as it is, not the law as they wished it was. If on principle they do the latter, their decisions will be open to legal challenge. They could then face the prospect of having to pay compensation to the party who has been treated unlawfully. This would be funded by taxpayers.

If this question is a reference to Renewal, then I would point out that they have confirmed that all profits that they make from the New Bermondsey Scheme will be taxed in the UK, as required by HMRC.

You will recall that following the decision by the Mayor & Cabinet not to proceed with the Millwall CPO, I was contacted by Steve Kavanagh, the club's CEO and invited to a meeting at the ground. The meeting was a genuine attempt by Steve to open a dialogue with the Council and rebuild a good relationship. He said that the meeting would include the two of us plus Steve Bradshaw. No one else was in attendance. The three of us met for over two hours. My understanding was that it was a confidential meeting. I came away believing it had been productive. Steve Kavanagh and I exchanged a few cordial emails afterwards in what I saw as a useful exercise in building trust and 'keeping the conversation going'.

So I was disappointed when, on 6th March, a week or so after our meeting, a phrase I had used at the meeting appeared in a tweet by a supporters group. Two days later I received a call on my personal mobile phone from someone purporting to be “Swiss Tony” who said that, if I didn’t agree to drop a course of action I was pursuing, I would suffer some unspecified disagreeable consequences. I took him to be a Millwall fan. I was confirmed in that judgement when later that evening I was mentioned in this tweet from the Millwall AMS Group. 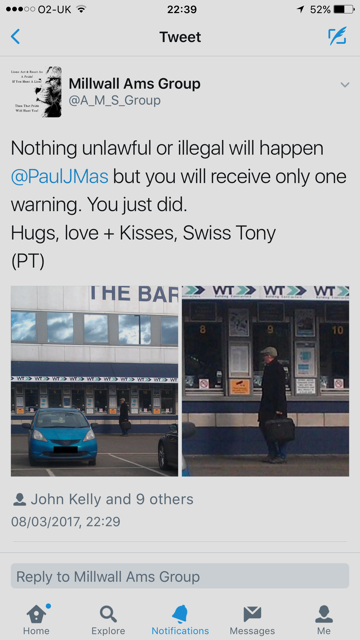 The tweet contained 2 photographs, taken from the Club’s car park, of me leaving my meeting with you. I reported this matter to the Chief Executive of the Council and the Head of Law. On their advice I reported the matter to the police.

One of the reasons that this experience was particularly disappointing was that I believe that this action put an end to the prospect of any further meetings between the Council and the club. It appears, given the questions that have been put to me by Barney Ronay of the Guardian, that the press have also been briefed about what was said at this meeting.

In the light of this experience, I am rather reluctant to agree to another meeting. I think that it would be reasonable for you to provide some assurances at the very least.

I look forward to reading the responses of the other candidates.
Posted by Maslinmemo at 02:47

I am one of the Labour Councillors for New Cross ward in Lewisham and an owner of Hales Gallery.